Once again Senpai Jenny attended the annual BKK camp held in the United Kingdom. This year 3 students (Matthew Basile, Bianca Basile & Miko Mitchell pictured below) and 1 parent also made the trip with her. An experience of a lifetime training with 160 other karateka, mainly from UK but some from Holland, Belgium, Israel and to have the opportunity to train with Hanshi Steve Arneil and his top instructors. The trip wasn’t all hard work as there was some time for sightseeing in London prior to the camp and the city was abuzz due to the Olympics.

Some senior students have already expressed interest in travelling to the camp in 2013, if you want to go please let Senpai Jenny know. The camp is held every year in August and is open to students of all levels who are 8 years or older.

Be sure to check out the photo’s in the web gallery. 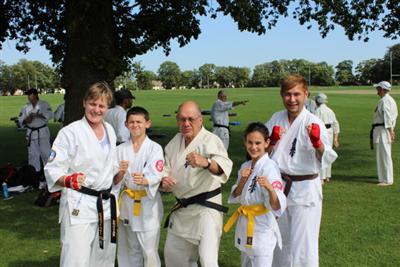