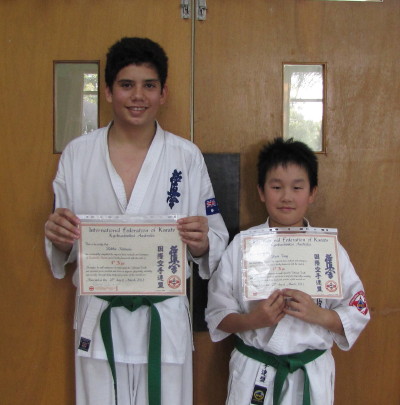 The Senior grading was held on Sunday 25th March at Petersham Dojo, the senior grading is for students who are sitting for grades from 4th kyu and higher. KKC Karate had 2 students who were eligible to attend this grading for the first time Robbie Simmons & Ryan Tang, both were successful in achieving the grade of 4th Kyu. This is a great achievement not only for the boys but also for the dojo as Robbie and Ryan are our first two students to achieve a senior grade. 4th Kyu is considered the beginning of the teaching grades and from now things will start to get a lot harder for these boys as well as the requirement / expectation on them will also be higher.

Well done to both of you, keep up the good work.