Senpai Jenny recently attended the British Kyokushinkai (BKK) Summer Camp 2011 which was held at Felsted, Essex UK. This is the second time Senpai Jenny has attended the camp and she strongly encourages all Karateka if they are ever in the UK during the month of August to try an attend this Camp as you have an opportunity to train with Hanshi Steve Arneil and his top instructors of the International Federation of Karate (IFK) our parent organisation. Here is Senpai Jenny pictured with From left to right hihan Liam Keaveney, Shihan Nick Da Costa, Hanshi Steve Arneil, Senpai Jenny, Shihan Alex Kerrigan and Shihan David Pickthall.

They trained really hard and did one midnight training session, which Senpai didn’t mind as she was still jetlagged on Aussie time, it is an amazing experience to train with over 150 other IFK Karateka from not just the UK but Holland, Israel, Germany, Belgium just to name a few. The energy and enthusiasm is infectious. Rumour has it that Senpai Jenny may be attending again in 2012. The camp is open to juniors from 8 years of age, so anyone wanting to join her should get in touch ASAP and start saving for the airfare. 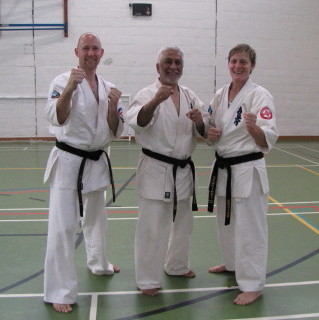 Pictured at left are Senpai David Norris, Sensei Moss Ageli and Senpai Jenny. Earlier this year Senpai David came and trained at KKC Karate Five Dock after meeting Senpai Jenny at the 2010 BKK camp and we believe he has another trip to Oz planned so we hope he will come and train with us again.